Backing up your stuff to external drives

Backups are one thing most people neglect, until it’s too late.  I admit, I’ve been subject to drive failures in the past where I’ve lost important data that I could never get back.  I even had two separate computers lose a drive on the same day.  If only I was smarter about my backups.

These days hard drives are cheap, fast, and most feature FireWire 400, 800, and eSATA interfaces which makes data transfer incredibly fast.  Since I do a lot of video editing and have a ton of huge-megapixel photos, music and movies, I have to rely on external drives because there’s no way I can pack this much disk space into my MacBook Pro!

I was recently asked by a friend about my setup, and when I told him how simple and inexpensive it was, he was blown away and is now en route to setting up shop the same way.  I’m not preaching that I have the best setup for everyone, but it works great for me and is economical.  I have a combined total of 6 TB of external hard disk space, of which 3.5 TB is usable due to disk mirroring (RAID 1).

My setup is quite simple, and consists entirely of Western Digital MyBook “thermometer” drives.  What’s great about these drives is they not just look great (which isn’t what you should be going for when buying a drive anyway) because the LED thermometers indicate how full your drive is, plus they are fast and reliable (at least that has been my experience).  They are connected to my MacBook Pro via a single FireWire 800 cable to the first drive.  From there, the other drives are all daisy-chained together, connected one after the next with more FireWire 800 cables.  Since each drive comes with a ton of cables, including a FW800 cable, it’s a no-brainer to setup.  A plus for Mac users: these drives all come pre-formatted for OS X (Mac OS Extended Journaled).

Here are the drives you see in the photo, from left to right:

As you can see I use RAID 1 (drive mirroring) for all but my Time Machine drive.  I’m less concerned about that drive going bad, as I know all of the data is on my MacBook Pro’s hard drive.  I use the full 1 TB for Time Machine so that I have a healthy history of backups, which has always come in handy.  The 2TB drives are also mirrored, which sucks to kick them down from 2TB to 1TB, but it comes with the peace of mind that if one drive fails, I don’t lose all my data (and just have to replace it).

What’s super cool about the newer WD drives (Western Digital WDH2Q20000N drives) is that they are fanless.  My older 1TB drive (far left) I usually leave turned off because of its obnoxious fan.  The other 3 drives purr right along, only producing noise when the hard drives are spinning.  They run surprisingly cool as well.  Data transfer over the chain of FireWire 800 cables is quick, although if I transfer huge GB video files, it can take its sweet time.  For really important stuff (completed projects, downloaded registered software, etc.) I backup to DVD and store in a safe place.

On a final note, I can’t say enough about Mac OS X’s Time Machine.  It has saved my ass so many times, going back an hour or a day or a week or more to get back a file that I accidentally lost.  What’s great is that it is not just easy to use with Mac Finder, but you can fire up Apple’s Mail.app, then go to Time Machine to restore any message or folder from the past as well.  Incredible stuff!

Sign up today and receive updates to your inbox. I will never share or sell your email.

No Replies to "Backing up your stuff to external drives"

Got something to say? Cancel reply

This site uses Akismet to reduce spam. Learn how your comment data is processed. 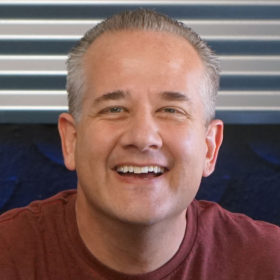