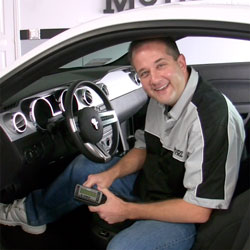 As you may have noticed, I have all but completely abandoned this blog in lieu of keeping friends and family updated through other social networking tools such as Twitter and Facebook.  From time to time I’ll hopefully update christhis.com with something useful!

If you’re wondering what I’ve been up to, well it’s been family, work, and my weekend passion of hosting and producing my own TV show called MOTORZ which ... (more)

NBC’s new Knight Rider show, based on the popular 80’s show, premieres this February 17th. It features the Knight Industries 3000 (KITT) Shelby Ford Mustang GT500KR created in the vein of the original KITT car that Michael Knight (David Hasselhoff) kicked around with his big poofy hair.

A friend of mine designed the iconic red lights on the front of KITT just below the front lip of the hood. I’m ... (more)

Frozone was looking through a recent SEMA newsletter and stumbled upon a photo we hadn’t seen of our Truckblog project vehicle, “Bank Shot”. The one we spent so much time doing the vehicle graphics work for.

It was taken by the SEMA staff photographer… and a great one at that! Click the photo to see the larger version. 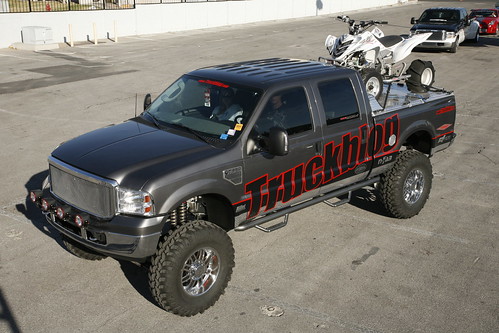 Last week I was in Las Vegas all week for the SEMA Show (automotive convention) with 6 others as part of my Truckblog Crew.  Here’s the first video posted of the event:

You can also see all of the photos we took. 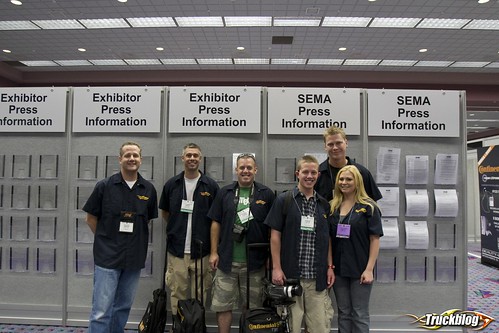 I headed off to Las Vegas for the SEMA Show this past Monday morning (4am!) and it has been a busy week. I flew home the afternoon on Halloween to spend time with my family, and currently I am doing some blogging at Truckblog to get some of the news and photos out from the past few days. I’ll be flying back to Vegas in the morning to finish up ... (more)

I just realized that I never showed my first major vehicle graphics project… probably because it took so long to do, and then I just got busy with a Ford trip to Michigan and the fires here in San Diego. Plus, I was scrambling last minute to get the plotter and the software to work so I could cut all of the vinyl for this monster truck.

With Brian’s huge SEMA vehicle decal project I have this weekend I couldn’t do the job with my 8 year old Roland Stika SX-12 10″ plotter. While it’s done a great job over the years, its time has come to be replaced by something bigger. Since Mike wasn’t using our 24″ plotter in Houston, he shipped it to me. It’s a behemoth 24″ GCC Bobcat plotter that’s basically brand new. ... (more)

The 2nd of two CORR events was this past Saturday here in San Diego (Chula Vista) and since I was still recovering from my Seattle trip, I did not attend like I normally do.  Frozone and Gillmore went instead, and Frozone got some amazing video by hooking up our in-car cam to the rear of the FOX Racing truck.  Check it out… it turned out awesome as usual!

I love having this new blog… I can post about anything now which is great! Since I didn’t have this set up a few months ago, I thought I’d post it now before I forgot again.