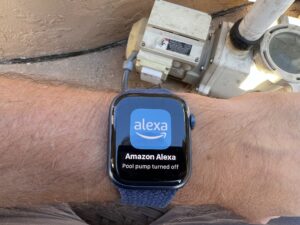 I figured out a cheap and easy way to make my pool pump smart so I could monitor my outdoor swimming pool pump (on, off, no-start). It requires no wiring or other electrical work, no drilling, and will work for any pump for that matter. It works like a champ with Alexa, and cost me less than $25.

If you don’t care to hear my story, skim down to “The Solution”. This summer I took over pool maintenance for my in-ground swimming pool that I’ve had for 22 years. In researching everything about maintenance for weeks and actively cleaning and keeping up with the chemicals, I’ve learned a tremendous amount. I actually enjoy maintaining it–and saving money in the process.

One of the keys to a clean swimming pool is circulation. At the heart of this is the pool’s pump. If it’s not running at least 8 hours a day (at least for my SoCal pool), you can run into problems. So, ensuring that my pump starts at 9am and stops at 5pm every day is something I obsess over. It’s a very common Pentair variable speed pool pump that has a lot of features with its built-in computer and keypad. Unfortunately, it’s not “smart” and can’t be tied into my home automation through Alexa, Home Assistant, Google Home, etc. It constantly has power, turning its pump motor on and off per the programmed schedule. 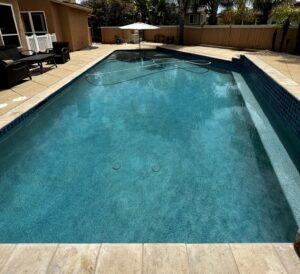 That’s great, but what if the pump doesn’t start when it’s supposed to? It requires a lot of power on its dedicated circuit, and since it’s outside all the time there’s always a chance it could fail due to a bad motor or wiring, a blown circuit, or someone messing with the buttons. A few weeks ago I encountered a situation where the pump did not start in the morning and I didn’t notice until the afternoon (it was a busy day). It’s definitely not the end of the world, but I vowed to find a simple way for the pump to notify me if it wasn’t turning on according to schedule.

I’ve been successfully using YoLink home automation sensors since earlier this year. It’s a brand I wasn’t familiar with, but after reading the reviews and trying their products out, I was 100% sold. I stumbled upon them initially because I was researching a sensor that would work at a distance–way out of WiFi range.

The purpose at the time was to alert my home when the mail was delivered (I’ll post an article on how I did that as well). We would go weeks at a time without checking our mail and it became a problem. Because YoLink wireless sensors use LoRa, it’s not a challenge. It’s been working like clockwork since I installed it. Same goes for door sensors for my gates outside.

Since my intended solution was for my pool pump was also outside, I was concerned about the distance and reliability. Since I’ve had such good success with YoLink door sensors, I figured I’d try their vibration sensor to detect vibrations with my pump to determine if it’s on or off. Their products are well made, have a battery life for a few years, and have never let me down. And no, this is not a sponsored post. I paid for them with my own cash after doing my own research and testing.

The problem with their vibration sensor is that it’s not meant for outside. It’s not weatherproof. That’s never stopped me, though. Read on… 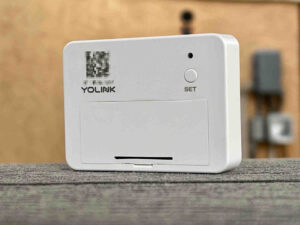 For $25 I purchased the YoLink Smart Vibration Sensor (Amazon, price varies). I weather sealed it, added it to the YoLink app, then set up a few routines in the Alexa app. It honestly couldn’t have been any more simple than that. I’ll share my Alexa routines, below.

All of YoLink’s wireless sensors require a hub. I already had the YoLink Hub which is also about $25. If you don’t already have the hub, then yes–this solution will cost you $50. But then you’ll be able to add other YoLink sensors to it.

To date I have purchased 12 YoLink sensors, they’re all in use with zero problems. In fact, when it comes to home automation sensors — and I’ve tried a lot — they are by far the most reliable, mainly because LoRa gives them insane range (up to 1/4 mile). The investment in the hub is worth it! I’ve never had a single problem with any of them. 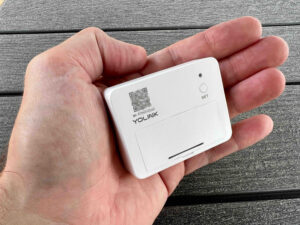 YoLink’s vibration sensor is way smaller in person. When looking at the Amazon page‘s photos, you’d think it was huge. It’s not. There are a few photos below to show scale: one photo of it in my hand, and another next to a test strip container. Like all of their sensors, it’s all plastic but very well made.

The sensor is not meant for outdoor use, but that’s never stopped me from using smart sensors outside. Yes, you run the risk of destroying the sensor (and voiding the warranty) but that’s a risk worth taking due to its low cost. I’ve also yet to find a weatherproof vibration sensor.

For my ideas on how to weatherproof non-outdoor sensors, please read my other article on How-To Weatherproof Wireless Sensors.

This sensor is well-sealed on the back thanks to the small Phillips screws and the 3M mounting tape which covers them. There are no visible seams there that would easily let in water. On the front there are a few obvious spots where water could enter: the battery door, the LED, and the Set button. I covered them up with two strips of nano tape (leaving the outward facing side covered with the protective film of course). I thought of trying some of the other methods I mentioned in my article but decided the tape would do the trick. Cut to size, press firmly and you’re done. 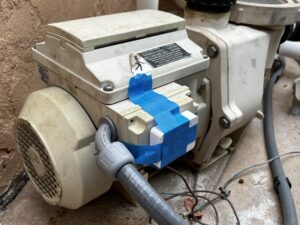 At first I wasn’t sure where I should put the sensor on my Pentair pool pump. Putting my hand on the pump, I felt vibrations everywhere but I felt as though I should put it as close to the motor as possible. I thought maybe I should put it somewhere underneath the pump. While it would be directly hidden from the elements, it wouldn’t be easy to get to in the future when I need to change the 2 AAA batteries (they should last about 2 years).

The spot I determined would be best was on the front of the pump (the cover for its electrical). That way I could also see the LED and in the future, easily change the batteries without having to remove it. To test out the placement I used some blue painters tape to strap it on tightly (you don’t want any gaps when testing placement since gaps would lessen the vibrations). I quickly determined that this worked perfectly. I didn’t make any adjustments to the sensitivity in the YoLink app (I kept it the default). 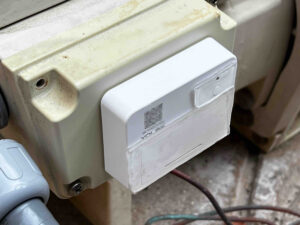 I set up two Alexa routines to notify me when the pump is on and off (see those, below). The routines worked great, so I ripped off the blue tape, cleaned up the surface of my pump with some rubbing alcohol and stuck it on.

Since that day, I’ve been receiving 2 push notifications to my phone and watch every day without fail. One at 9am when it starts, and one at 5pm when it stops.

This is a perfect example of how simple home automation sensors can be. 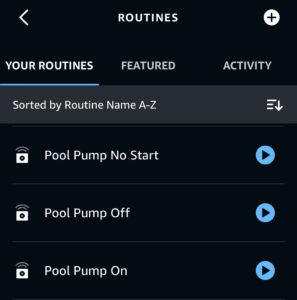 You can see the screenshots, below, to create similar ones or you can click these links to import them into your Alexa app and tweak for your needs.

Since push notifications from the Alexa app are a dime a dozen on my phone, I plan to disable the pump on/off notifications and trust that the “Pump No Start” routine will be the only one I need. To that end, since originally posting this article I’ve added another step to the no-start Alexa routine which uses IFTTT to send me an email in addition to the existing push notification. That way I’ll be sure not to miss it.

If you’ve read my article and got to this point, you must be interested in this topic! This type of article takes a lot of time to write, edit, and maintain over time so it’s accurate and up-to-date. I don’t ask for money or even your email address. But, if you found it helpful all I ask is that you use the Amazon affiliate links to purchase the items mentioned in this article so I get a little kickback from Bezos. It doesn’t cost you anything other than to click and buy. Thank you in advance for supporting my site and encouraging me to write more articles :)